An Updated version of Martial Arts

Muay Thai is an action sport in Thailand, which uses stand-up striking. Multiple clinching techniques are also used up in this sport. It is also known as Thai Boxing. Muay Thai is the cultural martial art and the national sport of Thailand. Its origin took place hundreds of years ago and this sport uses the whole body as a weapon. Muay Thai became famous in the twentieth century when the fighters of Muay Thai defeated the fighters of martial arts. 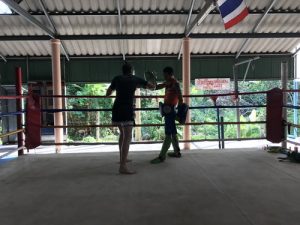 Muay Thai is also known as ‘The art of eight limbs’ as it involves the combined use of elbows, fists, shins, and knees. The hands are categorized as the dagger and sword, the forearms and shins are categorized as armor against blows, the elbow is used to act as a hammer, legs and knees act as the staff and the ax. All these limbs movements operate as a single unit and make the fighter a well prepared and an efficient sportsperson. Gloves and shorts are the main components of the Thai Boxing.
With the constant fear of war in the Thai region, the demand for learning a high level of martial arts has become very high. As Muay Thai became popular among the common and poor people, it also became a staple mark for the royal and high-class people. Many training centers for learning the Thai boxing have been opened in different parts of Thailand. Nowadays most people prefer to go to the gym in other countries however, Thai people still believe to get themselves trained in the martial arts and remain fit doing that. There is no equipment required to practice Muay Thai as you use your body as a weapon in this, which is the best part of this sport. Not only men, but women are also following a practice of learning Thai boxing to keep themselves safe and independent.